I’ve never had so many hits to my wine blog as when I posted one of my most controversial posts called, 5 Top Annoying Things Winemakers Do. Almost immediately after launch it was shared on Facebook by a BC winemaker, who commented that I was “bang on.”

Then, his followers started piling on and the hits kept coming. 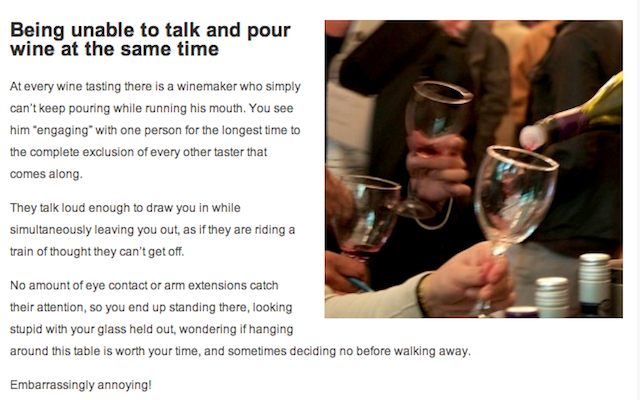 Within hours, everyone came out of the woodwork, rushing to the defense of  poor winemakers who toil tirelessly and selflessly for our benefit while being ignorant about using the Internet.

Winemakers, winery owners, bloggers, PR agents and wine enthusiasts commented on my site and on Facebook and Twitter to explain why my annoyances were true, or to argue how I was wrong.

I could barely keep up with the barrage, but I have to say I loved it. Tasting Room Confidential is a site that has never gained the traction it deserves and suddenly it was bombarded with attention.

All because I had the temerity to criticize the wine making establishment.

The 5 Most Annoying Things Winemakers Do is what is called a Controversial Post, which is the best type of post to get people to read your blog and comment about it.

Why? Everyone has an opinion. If you challenge people’s ideas about the world, their opinions become a coat of armor to protect themselves from your onslaught or to fight in line with you.

According to BlogGrowth.com, controversial posts have three elements.

However, the controversy that you stir must be kept at a low level. Otherwise, your post may backfire.

It’s always possible to go too far with controversy and pushing boundaries can work against you.

In a Wharton Business School study entitled, When, Why, and How Controversy Causes Conversation, researchers Jonah Berger and Zoey Chen found:

That means talking about religion or politics will shut down your post, but talking about the direction of toilet paper will set it on fire.

The responses I got to my controversial posts definitely told me I was on to something. Who doesn’t love wine, and by extension the wine maker? But has anyone ever criticized them for doing some things wrong? Apparently not, which is why I think so many winos rushed to support me or decry me.

Apparently, I treaded on thin ice when I pinpointed the almighty winemaker as a human, rather than a deity. Some winemakers took offense at my points, particularly the one about offering discounts, and that may have crossed the line of hurt feelings.

The site, Unbounce, which analyzed the Wharton study, described the emotional reflex this way:

“Successful controversial content on business blogs should stir up a debate that people feel strongly about, but that won’t result in genuinely hurting people’s feelings.”

Well, I hope I didn’t hurt anyone’s feelings, but I do think I touched a nerve with the Annoying Winemakers post.

Unlike most industries, wine has a precious and rarified atmosphere that makes people worshipful of those who bring the wine on, giving those bringers a false sense of deification. All I wanted to do was bring them down to Earth and remind them of how wine bloggers – and by extension wine consumers – feel about how they handle themselves and their product.

If that created a controversy, fine. Just wait until I tell them what I really think.

Have you written any controversial posts lately? What was the response? Was it good for you? I’d love to know.